We are truly grateful to every role player from the National Minister of Sport, the honourable Nkosinathi Mthethwa, President Danny Jordaan, SAFA COO Lydia Skillz Monyepao the KZN Mec for Sport, and so many people. Mr Michael Bender (CEO) RCD Espanyol de Barcelona Johannesburg Academy at the unveiling of the OR Tambo-Soncini games memorial plaque with the Mayor of Reggio Emilia in Italy, the Gauteng Provincial Government officials and the wife of the late Mr Guiseppe Soncini. Fifteen-year-old Saaniyah Domingo is one step closer to making her dreams of becoming an international footballer a reality, having received a sponsorship from Vuma to become a part of the Reial Club Deportiu (RCD) Espanyol de Barcelona Academy squad, who will also compete in IberCup, the world’s biggest International youth football tournament.

Through the sponsorship, Domingo’s training, kit and place in the academy will all be covered in full for the year, allowing her to pursue her passion for football and learn from the best in one of the most formative years of her career.

“My passion is football – I’ve been in love with it since I was a little girl,” she says. “My father would tell us all these amazing stories from his days playing under-15, how he played against prominent player Frank Malouda, and it just inspired me.”
With the onset of Covid-19, much like many other South Africans, Domingo’s father had lost his job, making it tough for the Domingo family to be able to fund his daughter’s way through the academy on their own.

“We weren’t in a financial position to get Saaniyah into the training and fund her to be part of the academy, so we’re happy that the bursary application came through when it did, and grateful for the support of RCD Espanyol de Barcelona Academy CEO, Michael Bender, and his team,” says Domingo’s mother, Farana Domingo.
“From the age of nine, she used to sit on the bench watching her sister play at Wits and while they would allow her to join in at practice, she was too young to play. But she’s always been driven in the sport. Even at the time she taught herself to tackle and juggle, up until now she’s still doing the same thing with the ball and I just want her to do her best, follow through and pursue her dream,” adds Farana.

Vuma, the country’s largest fibre connectivity provider, says that alongside its objectives of creating opportunities for communities across the country through the power of connectivity, its goal is to provide the vital investment needed to make both the RCD Espanyol de Barcelona Academy and IberCup Youth Football Tournament accessible to countless talented children – in and beyond South Africa’s borders. Taylor Kwong, CSI Manager at Vuma, says that many of these children would otherwise never have had the opportunity to participate in a global renowned initiative at this level.

“We are proud to be creating opportunities that have the potential to change lives for individuals and communities, and understand the difficulties faced by many of these talented children, who – while fully deserving of the opportunity – simply do not have access to funding or resources to make their dream a reality. We look forward to seeing the long-term positive impact as the journey of our ongoing partnership continues into the future,” says Kwong. Spanish Football Club RCD Espanyol Launches Its Academy In Johannesburg. Spanish Football Club RCD Espanyol has announced the launch of its academy in Johannesburg South Africa. The academy hit the ground running hosting their first ever tryouts where 1230 players got the opportunity to showcase their skills. The opening of the South African academy is the first of its kind in the country as it is the only LaLiga team with an official academy here.

Every Espanyol Academy comes as an opportunity for the young players and coaches as it is for the club itself. This project is not only an important talent hub for Espanyol but an opportunity to scout South African talent and to have new fans that help the club position itself as an ever-increasing global brand, spreading its growth and impact throughout all continents. This project is a joint effort with its local partner IBERCUP, experts in this field and an important player in South Africa.

RCD Espanyol is a professional sports club based in Cornellá, Spain. Founded in 1900, the club plays in La Liga, the highest division of Spanish football and play their home games at the RCDE Stadium, which holds up to 40,000 spectators. The club counts with a second team, Espanyol, twelve Academy teams, ladies’ teams and a football school. All of them train and play their matches as home teams in Dani Jarque’s training facilities, inaugurated on September 2001.

Through the establishment of the is academy, RCD Espanyol is investing in the development of South African players so that they can gain opportunities that they couldn’t access before. This shows that the club sees that there is a lot of potential for growth in the South African football industry and it seeks to assist by providing help at one of the most important phases in a players life, which is the development phase. Spanish giants RCD Espanyol de Barcelona academy which is in South Africa has finally and officially opened its doors with a wide range of coaches and players expected to be developed from the academy.

Espanyol play in the Spanish La Liga Santander which is the top-flight league in Spain and tgey are town rivals to the FC Barcelona team. On the day of launch, an estimate of over 5000 youngsters came for trials.

kaizer Chiefs legends Siphiwe Tshabalala and Brian Baloyi are both heavily involved in the program and they are expected to play a vital role in the development of South African young talent under this brand.

The academy has been opened in Johannesburg but young players from neighboring countries like Zimbabwe and Swaziland have been reported to have also came to try out for opportunities.

This is expected to be a huge opportunity for future generations of African footballers. The opening of the Real Espanyol Academy in Johannesburg saw over 5000 kids pitch up for trials with Kaizer Chiefs icons Siphiwe Tshabalala and Brian Baloyi involved.Having opened doors this weekend, the system which will be dedicated to developing both coaches and players took their first step by hosting open trials for talented kids from across the country and beyond.

Players from Zimbabwe, eSwatini, North-West, Limpopo, Eastern Cape, Kwa-Zulu Natal and Qwa-Qwa were among those who travelled the distance for the opportunity.

iDiski Times can confirm former Amakhosi and Bafana Bafana goalkeeper Brian Baloyi has been roped in as a Head Goalkeeper Coach while the process of securing ‘Shabba’ is also in motion.

The Espanyol academy in Mzansi is not only an opportunity to develop players and coaches but they are looking towards attracting fans and further imprinting their global brand which is imperative for the growth of the famous institution.

This project is a joint effort with local partner IBERCUP and is being touted as a long-term sustainable project with a main focus is to uncover more talent in South African football.

RCDE ACADEMY JOHANNESBURG IS THE FIRST OFFICIAL LALIGA CLUB TO OPEN IN SOUTH AFRICA. IT IS THE AIM OF THE ACADEMY TO EXPORT THE BRAND AND KNOWLEDGE OF RCD ESPANYOL DE BARCELONA ON AN INTERNATIONAL LEVEL. OUR NAME IS IDENTIFIED WITH OUR ORGANIZATIOBNAL MODEL BASED ON THE INTEGRAL FORMATION, PROFESSIONALISM AND SUCCES OF THE WORKING METHODS OF OUR YOUTH ACADEMY. 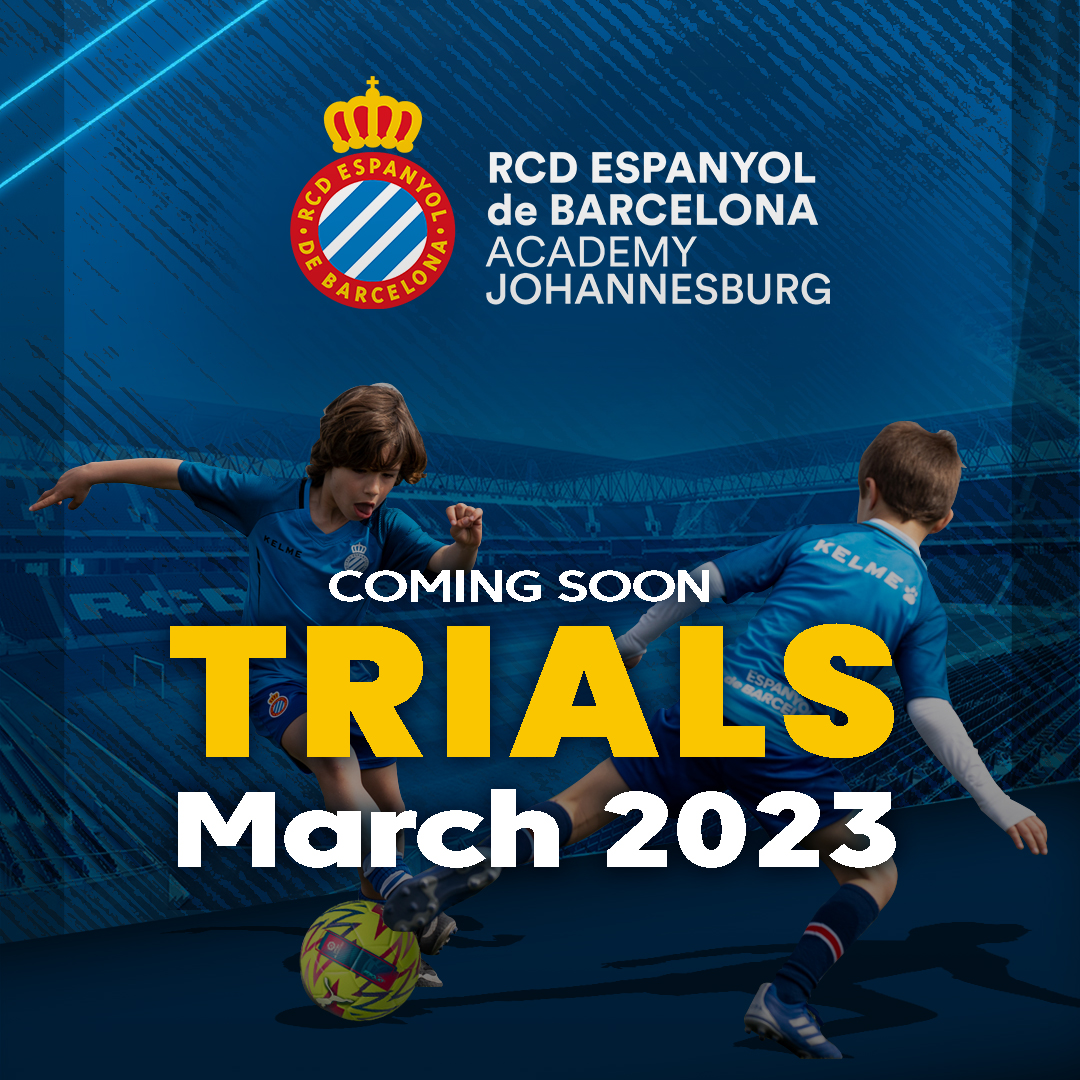